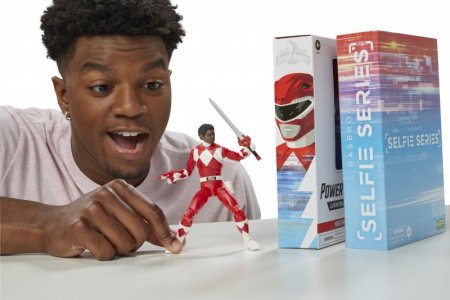 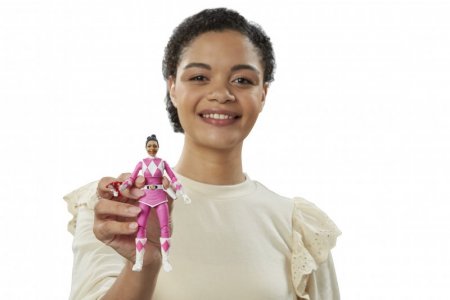 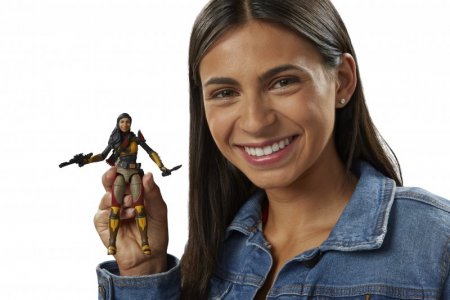 PAWTUCKET, RI – July 13– Hasbro, Inc. (NASDAQ:HAS) announced its new personalization platform with its first product introduction through Hasbro Selfie Series. The custom offering allows fans to create a collector-grade 6-inch action figure in their likeness based on classic to current characters seen across popular films, television series and comics. Hasbro Selfie Series figures will debut with fan-favorite character costume designs from G.I. JOE, Ghostbusters, Power Rangers, and Marvel, as well as designs inspired by Star Wars™ heroes. This one-of-a-kind experience will be launching in Fall 2022 exclusively on the Hasbro Pulse mobile app (for fans aged 16 and older in the US only), for iOS and Android devices.


Fans attending San Diego Comic-Con (July 21-24) will have the opportunity to preview Hasbro Selfie Series figures, with a select number of fans being among the first to create and purchase their figures, shipping Fall 2022. SDCC (San Diego Comic Convention) attendees should visit the Hasbro Pulse Info Desk in Booth #3213 to obtain a ticket for an assigned time slot. Limited tickets available, distributed on a first-come, first-served basis.


Hasbro Selfie Series figures are Hasbro’s first introduction to its innovative, new personalization platform. Using proprietary software and in partnership with a leading 3D printing company, Formlabs, Hasbro is giving fans a chance to digitally transform themselves into the action figure with the costume from the heroes they see on-screen and imagine themselves as part of the stories they love. From a Star Wars Rebel Alliance X-wing pilot, morphing into a Power Ranger, silently stalking Cobra as Snake Eyes, or swinging through the New York cityscape like Spider-Man, fans can indulge in the ultimate consumer experience with Hasbro Selfie Series figures.

“We are super excited to dive into the world of personalization and customization with Hasbro Selfie Series. We have done extensive research to truly understand the fan’s ask for a personalized product, and the team has done a fantastic job at making that dream a reality,” says Brian Chapman, Hasbro President of Design, Development and Innovation. “The innovation on this proprietary technology is truly remarkable, and we cannot wait to give fans the opportunity to add themselves to their collections.”

“Hasbro Selfie Series is giving us a new way to engage with the fans,” says Kwamina Crankson, General Manager & Senior Vice President, Hasbro Direct. “We are just scratching the surface when it comes to customization, and we’re excited to see where this new, innovative platform takes us.”

Citizen
So It's basically your custom printed head on your choice of an already made body sculpt.

The full load of Choices given currently

Out of these I think I'm going X-Wing Pilot or Male GB Rookie. The MCU Figures look off with other headsculpts. I have too many MMPR figs as is, My face on Snakes bod.......No.
And of the three SW male figures, I love Mando but I've always been a Rogue at heart.

Citizen
It's an intriguing idea, but for GI Joe, they need to have either a Greenshirt/Grunt body option or (my preference) a Cobra Trooper body option. Snake Eyes is too unique a character to just slap someone's head on and call it a day.

Citizen
I wouldn't be surprised to see the options expand if this does well.

Years ago I got a set of 1:18 heads from "That'smyface" made and they turned out really cool. It's fun that Hasbro's finally getting into the game!
M

Citizen
Internet is going to be filled with meme pictures of Black Panther figures with a white dudes head on it. I can already tell.

Citizen
Haywire mentioned doing this with TFs - anyone have the (kinda scary) pic of the Shockwave with a Barbie head that used to make the rounds? (...granted, it's probably been 20+ years since the last time I saw it...)

Staff member
Council of Elders
Citizen
If they add some more generic bodies this has potential.

Haywire said:
It's an intriguing idea, but for GI Joe, they need to have either a Greenshirt/Grunt body option or (my preference) a Cobra Trooper body option. Snake Eyes is too unique a character to just slap someone's head on and call it a day.
Click to expand...

CoffeeHorse said:
If they add some more generic bodies this has potential.
Click to expand...

I feel like Classified Breaker could make for a decent 'generic' Joe body. But yeah, generics for most of the represented franchises would be a cool addition to this project (and perhaps another way for army-builders to gather troops... if not for the price, at least =P).

I'm surprised there aren't any Jedi or Sith options in the initial choices, though. Maybe they're still figuring out how to quickly modify the mass-production of the bodies if, say, a dark-skinned fan wants his head on Classified Duke's body - exposed sections of skin like the hands and arms would need to match the custom head's. Heck, that could be why all of the available bodies are of characters wearing full-body outfits - so that they can sidestep that particular issue.

Also, they'd better be including the iconic helmets/masks for the bodies that all but need them - the Star Wars soldiers, the masked Marvel heroes, the Rangers, etc.
L

Citizen
As long as you can pop the head off, you can make yourself in to whatever you want. Or if say you choose Snake Eyes, slap on some paint and make that body your own. Not saying you should have to customize, just saying.
L

Citizen
Also, I really wish this was 1/18 scale but I shouldnt gripe too hard. Its an awesome idea.

Citizen
Agreed that the G.I. Joe Classified option needs to be a green shirt (Beach Head and Breaker bodies are good options). My first thought: I want to make myself a Viper.

Then I saw that X-Wing pilot is a possibility! Once this is available to the masses*, I will be doing this.


*I'm not going to SDCC**. That's just not realistic. But they're going to make this available to everyone at some point. Right? RIGHT?
**The models they used for this--I wonder if they got to keep their figures.

Citizen
I mean the press release says 'This one-of-a-kind experience will be launching in Fall 2022 exclusively on the Hasbro Pulse mobile app (for fans aged 16 and older in the US only), for iOS and Android devices.'

Citizen
I also wonder how much of the limited options has to do with the fact that after all these years Hasbro has still never really standardized their neck/ball socket connections. I remember years ago during Q&As, customizers repeatedly asked for standard sizes across the Joe, Star Wars and MU lines and they seemed to entertain the idea before never actually implementing it.

Fast forward to today and the more bucks they make available, the more bespoke the individual heads need to be (or the greater chance a head won't quite fit properly).

Citizen
I wonder what options are available for the full-bearded gentleman?

Citizen
The choices are definitely catered to designs that don't have skin exposed beyond their heads.

Citizen
When can I get a Titan Master who walks around with my face on his back?

I believe that with the Street Fighter Transformers getting a western release, there is no longer any reason this should be off the table.

Staff member
Council of Elders
Citizen
Generic bodies should be the first expansion step, it makes a lot of sense. (the SW pilots and Ghostbusters looks go in that direction). This first round more clearly caters to the wish-fulfilment aspect of it, for those who always wanted to be Snake Eyes, be Spider-Man, lead the Power Rangers, etc. My inner teenager is eagerly hoping the Green Ranger mold becomes available.

I haven't seen the interface, if they've even revealed it, but it'd be nice if you could send in a scan, then choose to make some tweaks (skin color, existing hair sculpt options).
S

Citizen
Yeah, I see a lot of “wish fulfillment“ in some of those segments, but I think stuff like this can be more effective with a few more “generic/non-iconic” types of bodies. The ability to insert yourself into the fantasy WITHOUT stepping on the shoes of your favorite character. I’m sure a LOT of the decisions were based on production and cost practicalities. There’s nothing here that hasn’t already been produced before and I’m sure that influenced what assets were available for this project.

Some of this stuff works: the Rebel Pilots and Stormtroopers, the Ghostbusters.
But I think would be nicer to have a unique Mandalorian setup instead of just the Mando. Maybe mix and match parts of the assorted Mandalorian figures released to date, make a UNIQUE expression for your own character. Not only that, but I feel the lack of a female Mando is a noticeable gap (especially with the Armorer and Sabine molds being available).

For GI Joe, the offered bucks don’t appeal to me at all. Like the Pilots and Stormtroopers, GI Joe offers a LOT in terms of “self insertion” that the available bucks don’t offer. The omission of the Cobra Trooper is most notable, but like others have said, a “generic Joe” makes more sense than cosplaying as Snake Eyes. And they have stuff to use! Beachhead comes to mind, as does Stalker. Give some extra accessories for customizing potential and it could be quite an offering.

Staff member
Council of Elders
Citizen
I agree with all that and I certainly see the appeal. My mind did immediately go to customizing options beyond the face/head ones I mentioned -- choose your Jedi robe color, decide on your accessories, etc from a predefined range. Stuff that would make your creation really you, more than just you as this exact person. But I imagine that would cause a range of production needs. I'm sure that there are at least some molds in each of these lines that would serve that role (Stalker and Beachhead and whatever Cobra goons would be great).

Definitely looking forward to this growing and finding out how they can offer more.