Citizen
Well I already came across a tree I had to cut down so I could rescue a Munna. It's no biggie. At least the moves are still somewhat useful in battle.

Citizen
That's the only mandatory HM use in the entire game.

Citizen
After I posted I thought cut and or Fly might still be needed, but couldn't remember.

Citizen
Fly is technically never required in any game. It's a pure convenience. That said, it's better than having to redo Victory Road whenever one wants to rematch the Elite Four.....
G

Citizen
Right off the bat on this community day thing, I caught Shinx and Roselia, over the course of the day I caught three shiny Machops, another Roselia, two Swablu and a Gible.

Also I never noticed there was a prelude to SuMo in gen VI. In XY you can meet a backpacker in a hotel and he'll give you a 'strange souvenir' from a unknown region, these are later shown to be from Royal Avenue in SuMo. In ORAS, when you reach Hoenn's Battle Resort you find a character called Looker who's been in the games since gen IV, he has amnesia and only knows his name, he also holds a Audinite and that's it he just sits on a bed in a hut for the rest of the game.
In SuMo during the UB missions, you're working with him and Anabel, he mentions that Anabel was found washed up on Poni Grove's beach about ten years before the games events, she only remembered her name and had vague recollections about defending a tower, it was implied she came from gen 3 RSE games where she was a trainer in the Battle Tower and that world may have been destroyed by the Ultra Beasts and she fell through the ultra wormholes, I wonder if they'll expand on that in the future.
Z

Citizen
It feels like Pokemon's been hinting at this...strange, epic multi-dimensional "crisis" for a while now. The Link Cable from the Delta Episode of ORAS, the Ultra Beasts, Rainbow Rocket, Necrozma, Dynamax Adventures, and Eternatus.

I'm not sure if they're hinting at something down the line (maybe just Masters EX?) or a attempt at LORE like in Kirby or if they're just being meta. A lot of these things might be hinting at "unplayed" or "unfinished" copies of the past games. Games that people started and then never beat...so you end up with the villains "winning" causing stuff like Rainbow Rocket.
G

Citizen
SuMo shown Alolan scientists to be interested in Pokemon from the Sinnoh region by their research, they mentioned Bronzong, Palkia and Giratina in research notes. Type Null is very close to Arceus suggesting it was the template. There were references to Distortion World.
I think Gamefreak had plans for a DP remake of their own making only for the game to be handed to the developers behind Pokemon Home.
T

Citizen
Yeah, Type Null was an attempt to make an artificial Arceaus.

Citizen
So second trade I did for Shining Pearl was getting a Vulpix to a Vtuber on Twitch That was fun. And all I got was a Starly but oh well. She's just barely into the game and I'm in dex completion mode at this point.

Citizen
I'm trying to make a living dex in Home. I've taken a bunch from Go and have quite a few in Shining Pearl waiting for Home compatibility.

The hitch is that, yeah, I probably could get most if not all of the rest of these if I still had Bank to use with my DS games, but I'm not about to start a whole new subscription just for dex completion (assuming Bank even still works).

So I'm pretty much down to what I can get from Go, Shield and Shining Pearl.

You know, I understand why they couldn't have a complete Nat Dex right off the bat for Sword and Shield. I really do. I even understand that it would probably take a while to have them trickle in.

But to take the stance of not even trying to add them kinda hurts when I have several generations of hard earned legendaries and shinies stuck in Home with no where to go. I miss my Shiny Delphox

Citizen
I think all I'm missing for a live dex is Meltan, Melmetal, and Regieleki. The first two because I just can't get into Go, the last because I've been too lazy to replay the Crown Tundra on another file.

Citizen
Ugh! I absolutely did not want to get the DLC for Sword. I already went through them both on Shield. But that missing Regie and the alt forms of the new Legendaries are going to be a sore loss.

Citizen
Just.. start a new game with a different profile *if it's still the main switch* and catch it and send it to to home...

Citizen
Yeah, I just did a second profile for alternate choices like the other Urshifu. I even got both of the horses for Calyrex. I just can't be bothered doing the whole Regi hunt again.

Citizen
You know...I just realized something. I've actually done everything with Shining Pearl that I want to do. With Shield, I really wanted to Masuda a shiny Rookidee...but that's become an exercise in boredom. There's more I can do with Black...and I really do want to get back to that...when I feel more up to staring at that 3DS screen.

I'm honestly thinking of putting Pokemon on the back burner for now...maybe until Legends Arceus comes out.

Citizen
Holy shit, guys! I just hatched a shiny Wailmer from a 2K egg on Pokemon GO. I am soon to have a shiny Wailord in Shield. 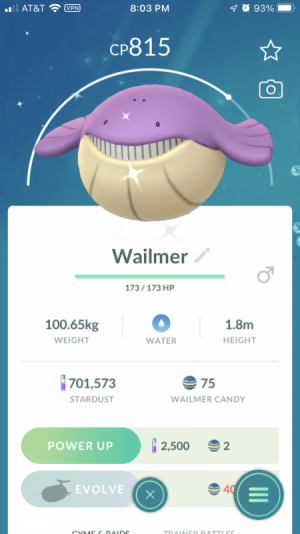 Citizen
Thanks for the heads up. I'll be sure to get that after work.