Citizen
Okay, so is Cyclizar a pre-evo of the box Legendaries or is this a separate Motorcycle-based Pokemon?

*Goes to look it up*

Huh...so they don't MENTION anything about Cyclizar evolving into either Legendary. It seems like this will the be "bike" Pokemon until we get our legendaries, since the description on the website says EVERYONE rides around on these guys.

Citizen
We have a new Pokemon!

They've been really teasing this one for some reason. And it's painting trees around where it nests. Maybe the different colors of paint attract different kinds of Pokemon? Maybe it'll learn Sketch and become this generation's Smeargle?

Honestly, I thought it was a bug-type due the LARGE eyes and shell-like ears when I first saw it.

On the one hand, the animations are actually kind of impressive for a Pokemon game.

On the other hand...EW EW EW! The way it puts colored spit all over it's finger to draw on the trees is SO GROSS! I'm assuming this is something real Aye-ayes do in the wild?
Last edited: Sep 1, 2022
S

Citizen
Oh, I like our two new Knight Pokemon. Ugh, they're going to be versions exclusives, aren't they? I don't want to have to choose! They both look really cool. Armarouge (Fire/Psychic) and Ceruledge (Fire/Ghost).

We get our first look at our villain team, Team Star. I'm guessing this is going to follow in the tradition of Team Skull and Team Yell, being the "fun" evil team with the main villains being...we still don't know. Maybe the two different Professors this time around? Are the Professors screwing around with time and ruining stuff? Or Maybe the principal of the school running the scavenger hunt? Using children to fulfill their evil plans? Maybe both? Neither?

Oh, there's going to be SO MUCH fanart of Mela. And SO MUCH of it's going to be questionable..."Fire Crew" also seems to imply we're getting multiple sub-bosses. Maybe one for each element?

This also seems to confirm that we're getting a Engine Pokemon, since we see one for a second running the Starmobile. Probably has a gimmick like Rotom, where it can take different forms..

Whats this about Titans and Herba Mystica? I guess we're getting oversized Pokemon again. I guess it's a way to bring back Totem Pokemon. I'm...not sure why they don't just call them Totem Pokemon, but fine. We already have one gimmick this generation, but another one is fine. I wonder what you get from defeating them...other than these "Mystica" items and probably a strong Pokemon?

Klawf...this is a sand-crab, I guess. Doesn't do much for me. The mustache is cute. Kind of reminds me of the crab enemy from Super Mario Bros 2.

Geeta's the league chairwoman this time around. Probably another candidate for a final boss.

Looks like they're keeping the puzzle aspect of the gyms around. Similar style to SWSH.

So, I guess our 3 stories are going to be: Fighting Team Star, Fighting Titan Pokemon, and Fighting Gym Leaders for the League Challenge.

Going off of Serebii, I guess we also have the ability to auto-battle in the game. You can send your Pokemon out in front of you and it can automatically battle random Pokemon. Kind of a interesting way to avoid grinding. Hopefully, you get a chance to capture these Pokemon if they turn out to be shiny. Honestly, I wouldn't be surprised if this is our new Shiny-Chaining mechanic for this game.
Last edited: Sep 7, 2022
Z

Citizen
We're getting a Shiny Eternatus event from September 18 to October 1. Gamestop in the US.

Hopefully, they get enough code cards this time around. It always feels like they run out fairly quickly.

my son turned 5 last month and got some Pokémon cards. We got some cool looking ones, I decided to buy some more. Below are some of the better pills (I think). I’ve been looking them up, and not that I expected to retire off of these, without getting them graded they aren’t worth near as much as I thought. I have a feeling grading is expensive.

Who else collects these? 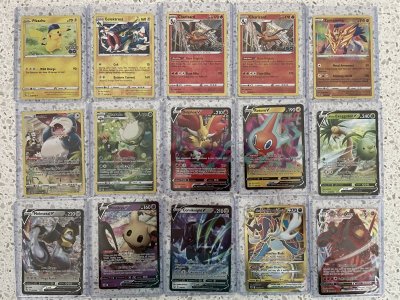 Citizen
I have a small collection thanks to Build a Bear, Gamestop, McDonalds and such. I must've gotten some boosters on top of that, because I have far more than what can be explained with collector cards. But I don't really collect them.

Citizen
I have some of the old cards from when the game first launched, but I didn't really get into it. They're sitting around in a box somewhere.

They also tease a new evolution in the trailer. This...um...oh, my the fanart...

Citizen
Glad to see Pokemon play around with the idea of a convergent evolution.

Citizen
I bought a box of VMAX Climax, should be here Tuesday I think. Hoping for a god pack but that’s not my kind of luck.

They also tease a new evolution in the trailer. This...um...oh, my the fanart...
Click to expand...

Even more phallic than the original!