Citizen
Up on both Target.com and Hasbro Pulse: Limit of 2 per customerEstimated ship date subject to change, items may ship earlier or later than anticipated without noticePayment will be collected once item is ready to ship Transformers robots have always been -- More Than Meets the Eye -- but now, through the Transformers Collaborative... Citizen
That cape on the bat mode is so over the top. It's almost what makes this whole thing work; totally unnecessary, but they did it anyway

Citizen
Agreed. The only thing better would have been if they had made it look like the bat was wearing a tiny tuxedo.

Octavius Prime said:
That cape on the bat mode is so over the top. It's almost what makes this whole thing work; totally unnecessary, but they did it anyway
Click to expand...

Shout out to Bela Lugosi, who was buried in a Dracula cape, thanks to his family.

Totally unnecessary, but they did it anyway

Citizen
And it's out already.

Citizen
do we know where it was found?

MAXimum Overdrive said:
do we know where it was found?
Click to expand... 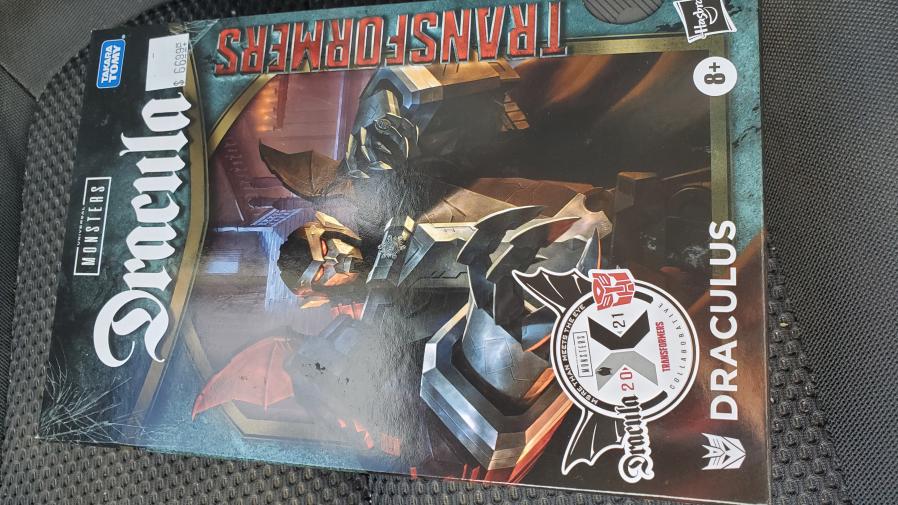 Transformers Draculus Found in Canada for $66

That was quick, seems like Draculus, who was revealed today, is already being distributed and has been found in a brock and mortar location. This was at a collectibles store in Quebec called Collection Mania. Draculus was $66 CAD but the fan who purchased

Citizen
Man,. they JUST barely managed to get an official reveal in before it was found in stores.

Citizen
Got home and Draculus is already sold out.

Citizen
Hmm, an immediate brick and mortar sighting makes me a bit more hopeful that the Pulse orders will ship early. Shouldn't get my hopes up but we'll see

Staff member
Council of Elders
Citizen
It looks a lot better than I expected.

Citizen
I enjoy that they didn't bother giving Draculus a weapon that wasn't a gun.

That was the best part of the original film. "Look out, Dracula's got a piece! *blam blam*"

Citizen
Got mine on pre-order. Would hope they do other Universal Monsters, but I'm happy with this one regardless. Wish he retained the Titan Master/Headmaster giving us a Reinfield or somebody. Vlad Tepes?

Staff member
Council of Elders
Citizen
Someone should really be in this thread but isn't yet.

Citizen
I wouldn't be surprised if Fangry, Weirdwolf or the monsterbots get remolded as the other Universal Monsters...

Citizen
Like: That he's someone that makes sense for Ectotron and Gigawatt to team up and fight.

Dislike: The lack of fun official fiction, bio and set-up around a very fun character concept. Tie him in with the Dweller in the Depths energon vampires, or with Bomb-Burst the previous Decepticon Vampire, or IDW's Sparkeaters, or heck if you want to be very very silly Frostferatu. There's just so much fun stuff a comic could play with here.


-ZacWilliam, I guess what I'm saying is get this guy in a story with Autobot X, Fangry, Abbot and Costello, STAT.

Citizen
I was tempted to get this, not because of the "Dracula as a Transformer" part, but because, with a new head, it might make a good Robat. 8^)