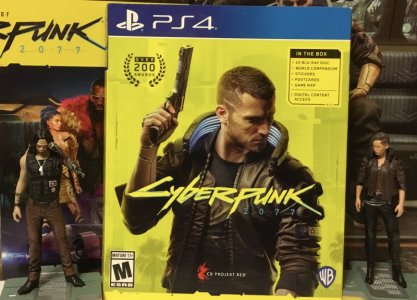 Don't really have anything to say except what's already been said on previous versions of the boards. But since there's a tabletop thread, I guess there should be a video game thread as well.

Staff member
Council of Elders
Citizen
Patches are still coming out. Unfortunately it seems they're optimizing the game's performance by gutting features. The traffic has gotten noticeably lighter.

Hopefully this will be a good thing in the end. If they are going to add driving AI, it probably would be best to completely remove what's there and not put it back until it's properly built.

Staff member
Council of Elders
Citizen
I was planning on checking this out come the holidays. I was hoping that it would be fully patched by then.

Citizen
Before the patches, I was having a bunch of crashes. But I think things are pretty steady now. I don't even remember when my last crash was, several updates ago...and I'm on PS4.

I won't say it's completely glitch free, but I haven't noticed anything major lately. I honestly think they've patched it up pretty well now.

Of course, I'm just one person and I think I've been lucky in general with this game. But I do think it's worth a try now.

Staff member
Council of Elders
Citizen
Cool. So hopefully the PC version will be stable by then.

Citizen
Of course you know how it goes. No sooner did I say that then it crashes during the credit. Still, that's the first crash I've had in months...so...

Staff member
Council of Elders
Citizen
This is not the first piece of evidence that this game's bugs have a sense of humor.

Citizen
So new big update hit. The first day many PS4 players (including me) couldn't even start the game because of the new update. But they patched it yesterday and I was able to play it for about an hour before going to bed.

There's a couple more vehicles and weapons, several new apartment, the option to change your look and new rext messages from your romance option. So, nice update.

I was only able to play it a little bit last night, but I have heard some people say on YouTube that this is the state it should have been in when it released and that if you were waiting for things to be patched before buying it, now it finally at the point t go ahead and buy it.

Citizen
New trailers for the Netflix show and the future expansion as well as talking about the update that hit yesterday... and a mobile game.