Citizen
Saberblade was cool enough to share a report from Botcon 2022 in that thread. By far the most interesting thing there for me are the documents Budiansky shared. Among them is the 1985 line Toy/Character as of August 15, 1984. I love behind the scenes stuff like this about how the line developed and changed so I wanted to look at it in detail. 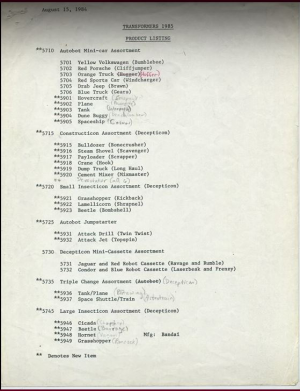 1) I Wonder if "Hugger" here was a typo or an actual early name. Since this is from around the time the 85 line was decided one would assume as an 84 toy he'd already been set for a while, so a fairly amusing typo seems most likely.

2) Twin Twist and Topspin being listed here isn't particularly notable other than to see that they weren't specifically marked out in anyway vs the characters who DID appear in fiction. It always feels strange to me they were so excluded since they weren't licensed from elsewhere like the others that were left out.

3) Interestingly it looks like the 85 Triple Changers were originally considered for the Autobots. Given Astrotrain that makes sense to me as a space shuttle was a very popular vehicle with a lot of positive emotions behind it in the early 80s. I wonder if this faction shift is at all related to the Deluxe Autobot listing later.

4) Here's one of the most interesting bits to me. The Deluxe Insecticons list has Chop Shop as the Cicada and Venom as a Hornet. Now that could be a mistake, *BUT* in a packet of Beetras concept art that was sold online years ago there were toy designs (not just character art but actual toy transformation engineering drawings) for the engineering of a Beetras Hornet. Hasbro did make TFs of designs that had been made but not previously released in the 1980s. It is plausible that at this point Hasbro considered purchasing whatever stage that Beetras Hornet design was in and releasing that, before they went with the Deluxe Insecticons we got. 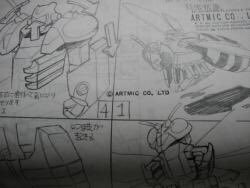 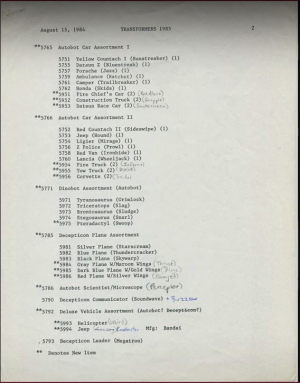 5) Note here that Skids is included as one of the old 1984 toys not the new 1985 toys. A lot has already been talked elsewhere about how that happened and how it resulted in Skids kinda falling between the cracks somewhat.

6) Next is the Deluxe Vehicle assortment. Note that it's not "Deluxe Autobots" yet they had apparently not decided on a faction for these yet. Also we've seen in earlier line documents that the Bonaparte Tulkas toy from the same line was originally considered for US release along side them, but by this point seems to have been firmly dropped from contention. What I have to wonder is... Whirl and Roadbuster are very militaristic toys I wonder if these two were considered for the Cons when the Triple Changers were going to be Autobots, as seen above. The two Triple Changers becoming Cons might have led to the decision for these two guys to become Autobots to balance things out. Can anyone make out what Roadbuster'a crossed out preliminary name was, I can't read it? 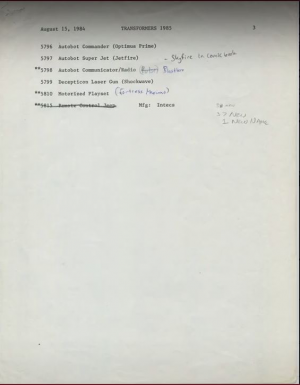 7) Here we see the change to Skyfire for media has already been made.

8) Preliminary names for Blaster were Pulse and then Blastbox

9) We've known for awhile that Fortress Maximus started as Omega Supreme's preliminary name. Looks like that was still current as of August 84

10) The last and second most interesting thing here was that apparently there was originally going to be a remote controlled transforming Jeep toy in the 1985 line that was dropped after this list was made.The note here says it was liscensed from a company called Intecs. That name turns up nothing on a search BUT there was a toy company called Intex in the 80s and since that would be pronounced the same I think it's pretty likely our culprit. As far as I could turn up online Intex (also sometimes Zee Intex) put out a line of Moto-bots, very cheep TFing vehicle-robots with pull back motors. No remote controlled toys from them I could find. The only vintage transforming remote controlled Jeep I turned up at all was from Japan in the later 80s so what toy this was remains a mystery to me.

Anyone remember a TFing Remote Control jeep from the early 80s? It's listed alongside the bigger toys, which is interesting as well. Suggesting maybe a fancier toy vs a cheep corded remote controlled toy.

Citizen
Interesting that Thrust is listed as gray plane with maroon wings and Ramjet as red plane with silver wings.

ZacWilliam1 said:
Can anyone make out what Roadbuster'a crossed out preliminary name was, I can't read it?
Click to expand...

Call me crazy but I think it might say "Convoy".

Citizen
Update on #10 from McFeely over at TFW. Intecs (not Intex after all) was a Korean company that produced the toy that would become Shockwave for ToyCo who originated it. We know Hasbro had a relationship with them because they are in the rights fine print on Shockwave's box.

Sadly nothing comes up for them online except a few mentions relating to Shockwave so what the Remote Control Jeep robot would have been and whether it would have been from them directly or from a third group like ToyCo and just produced through Intecs remains a mystery.