Citizen
I've never really gotten through it other than the first season sadly. I should really try and burn through it on Funimation.

But just finished The Duke of Death and his Maid for the season. It's not the best animation but I found it cute and am a sucker for the love between the two. Glad it's getting another season.

Citizen
I just caught up with the latest ep of Digimon Adventure 2020, the series on a whole has been rather poor in terms of story, the animation has been pretty nice but the main problem that seems to be the lack of intersting villians, pretty much after Devimon, the primary villian of the show was just some anicent monster who doesn't even talk and we are expected to believe is the big bad until they bring in another big bad to be the final boss and then during this latest ep, it feels like they didn't know what to do, thus they ripped off Pride from FMA Brotherhood!

I think the best anime of the year that not a sequel or remake, has to be To Eternity, its one of the most unusal series but it becomes gripping as it goes on!

Best anime for this season, I would give it to Battle in 5 seconds after meeting, sure the animation not exactly the best at times but the story is pretty good and the main character primary power is rather different and its not super destructive but its how its used is the key in this!

Best sequel, for me has to be That time I got Reincarnated as a Slime, thou I do think a large chunk of season 2 pt 1 could make for a good movie, ending with the reival of Veldora after Rimeru accsends to true Demon Lord status!

A wild card for anyone wanting a few laughs, I recomend Sleepy Princess in the Demon Castle

Citizen
But man Slime S2P2 took a while to get back up and going. Like 4 straight episodes of meetings and plotting. And Tomorrows the season finale. I mean it was cool getting the world building but man after the Demon Lord ascension it is just Talk talk talk talk. I wanted to go back to Slime Diaries a bit.

But my biggest issue with Digimon 2020 besides the real lack of interesting villains is the over focus on Tai and Agumon. Sure each of the partner pairs get their spotlight episodes and we've gotten everyone to mega at least in one form each, but Tai and Agumon can skip an episode people. The crest "search" was ridiculous how they would show up to "help" each episode.

I've been enjoying Dragon Quest: The Adventure of Dai a tad more. I know we're getting to the end of it but I think it's probably at least got another cour worth before it ends. I've spoiled some of the later reveals on Wikipedia sadly but I'm still glad there is more to watch coming.
Z

Citizen
The trailer for the new Dragon Ball Super movie came out:


The CGI actually looks pretty good here. I guess I shouldn't be surprised with how good FighterZ looked, but I still am.
Last edited: Oct 8, 2021

Citizen
The CGI is making this look bad, they should of used the animation style from Brolly, I can see in a few years this aging badly as a lot of CGI tends to do!

Citizen
My take away is...

Did Piccolo finally get his own place!

Daith said:
My take away is...

Did Piccolo finally get his own place!
Click to expand...

It could be a Capsule house, you know, press of a button and it transforms into a Capsule and you can put it in your pocket, that would be awesome!!

The other day, I busted out my Transformers Victory Box set and began rewatching the show, then last night a thought came to my mind, Victory in a sense what Combiner Wars could of been, I mean a large chunk of the main cast can combine, Dino force to Dinoking, the Breast Force, Star Saber combining with his various extentions and then Victory Leo, the other Brain masters can combine, the Multiforce can combine and they are battling it out on Earth or across the galaxy and they are showing the combining sequences!

Citizen
My Next Life as a Villainess is fun. I'm glad that S2 shook thing up a bit, I was afraid of the relationships staying mostly the same. Finished Idol Time Pri Para, basically idol anime aimed at little girls but it was cute brainless fun. Ended up skipping the songs a lot though. The concert in the last ep was great.

Binged Tonikawa, it's pretty cute overall but some of the fan service involving the underage chars... Not exactly a harem anime but straight guys are definitely the target audience.

Is this thread for anime only, or can we talk about manga/translated LNs too?

Citizen
Kimetsu no Yaiba season 2 has started and... 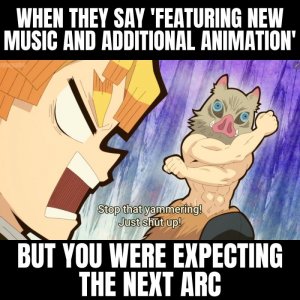 Citizen
They decided to run a Kickstarter to get an english dub release of the Dirty Pair TV series done.

It never had one, and it met its funding goal in like three days. Everything here is just stretch goals to the set and other Dirty Pair episodes and movies. Two weeks left and about half the goals have been hit.

On top of that, they added the TV Series to Crunchyroll and RetroCrush's catalogs, so between that and Nozomi's own youtube channel you can watch the entirety of Dirty Pair online for free.

Citizen
the Gridman Universe goes on...

Citizen
It took a looong time but I'm finally caught up with Boruto. Ep 220!

Citizen
Finished Citrus. Started strong but fizzled out. It fell into the romance trope of introducing a new rival as soon as things were resolved w/ the current rival. Goodness knows there was enough potential drama to not need a constant rival. Also watched a shorter Yuri series that I already forgot the name of... Mostly just fanservice anyway.

Just started Given. Like it so far, drama/BL without being too cliche about it (so far).

Citizen
Just watched the latest ep of Yuki Yuna is a Hero: The Great Mankai Chapter, basically its season 3 yet part 4 of the story they are telling, as season 2 was a prequel and a sequel to season 1, the story has slice of life moments but it tells a serious magical girl story, but nowhere near as serious or dark as Madoka as it kind of leans upon the friendship trope a bit!
You must log in or register to reply here.
Share:
Facebook Twitter Reddit Pinterest Tumblr WhatsApp Email Share Link
Top Bottom