https://www.reddit.com/r/StarWarsLeaks/comments/rmz91d
A LucasFilm employee gift for Christmas 2021 has been revealed to have logos for Willow, Star Wars: The Bad Batch, Star Wars Visions, and the logo from the 1993-1998 Dark Horse comic series Star Wars: Tales of the Jedi. Strange that we have heard nothing of this project, but the positioning of the logo suggests an animated streaming series similar to The Bad Batch and Visions. It could be a generic trademark reuse to parallel Marvel's What If...? AU series, but the recycling of the original logo implies a direct adaptation.

For those not in the know, Tales of the Jedi featured the Jedi of the Old Republic fighting against the original Sith Empire of Naga Sadow 5,000 years before the films, and then a new Sith Empire led by the fallen Jedi Exar Kun a thousand years after that. The latter storyline would set up the famed 2003 game Star Wars: Knights of the Old Republic, taking place a few decades later, as well as tie into fellow 1990s Bantam Spectra novels, where the ghost of Exar Kun returns to trouble Luke Skywalker's Jedi of the New Republic.

Citizen
https://twitter.com/i/web/status/1484658724887314441
Mary Elizabeth Winstead has now been announced for the cast of Ahsoka, the follow-up to Rebels and spin-off of The Mandalorian. Nothing has been revealed yet for her character, and I have not heard any specific rumours about who she will play.

Same. Although I haven't seen her in much these days....

The Predaking said:
Same. Although I haven't seen her in much these days....
Click to expand...

No Fargo, Birds of Prey, or Kate? She was great in Kate and that was very recent.
A

Not as much as Ewan

Citizen
I am home at my moms and my 4yr old son has been loving my vintage Star Wars toys. The one he loves the most is my (and I know it’s not vintage) AT-AT walker that came out awhile back that was really big. Came with a speeder bike and driver. Both sides open up. He’s been playing with it everyday we have been home.

Tonight he saw my Star Wars Unleashed figures still in package. The big ones before the ruined the line. I got a couple of thoughts about them:
1) these figures are still cool as hell and make great display pieces. All are unopened.
2) it’s ashame they are not worth more than what I bought em for 20+ years ago.
3) if they had more playability to them I’d let him rip all 24 of them open since it seems nobody wants them.
4) I feel like these were a lead into the Black Series. Collectible figures but BS has the playability to them as well as making great display pieces.

Citizen
And as far as the EU goes, I loved most of it. Courtship Of Princess Leia was my first foray into the EU and I loved it. That section around Darksaber, Crystal Star and Children of the Jedi got a little weird. I don’t really remember the later series of NJO, LotF and FotJ. But I remember I enjoyed them. Luke kinda irked me as but as he was always the mediator and thinker until peaceful words didn’t work anymore then he came in and saved the day. He definitely seemed a little OP in some books. I hated what they turned him into in the sequel movies vs him in the books. Here is my collection. I just reorganized them to be in order yesterday. 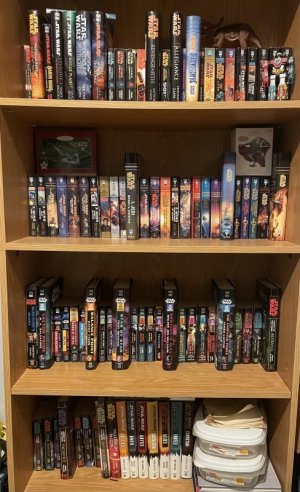 Staff member
Council of Elders
Citizen
I think my first EU book was the second of the Thrawn trilogy, as my older brother had borrowed the first one, so I didn't get to read that one until much later.

Citizen
Other than some kids story books from the late 70's early 80's my first EU book was Zorba the Hutt's Revenge...... But within the adult fiction it was Heir to the Empire after my older brother finished reading it when I was in fourth grade. My worst of EU is probably the Black Fleet Crisis trilogy. never got through it. Crystal Star had the Solo kids front and center and that was always my jam. But It was bad there's no denying it.

Daith said:
Other than some kids story books from the late 70's early 80's my first EU book was Zorba the Hutt's Revenge...... But within the adult fiction it was Heir to the Empire after my older brother finished reading it when I was in fourth grade. My worst of EU is probably the Black Fleet Crisis trilogy. never got through it. Crystal Star had the Solo kids front and center and that was always my jam. But It was bad there's no denying it.
Click to expand...

I liked how BFC middle book (I think) had part 1 dedicated to Luke, part 2 to Lobo and part 3 to probably Han and Leia. Then BAM! They all came together in the end.

I remember being so excited when it came out. I got the hardcover version of it.

Citizen
I won't deny it, but at least I got through it. The BFC felt like after the Prequels any sort of hold it had on what Luke and Leia's Mother was like was complete BS.

But I get why the later years of the EU got just as maligned. Lot's of new ideas thrown about after the Prequels came out and during the run of the Clone Wars. I liked a lot of it for what it was. The idea of the Yuuzhan Vong as a new enemy was interesting but overplayed. And it starting the years long post ROTJ storylines with most starring more of the EU characters over the original cast didn't help. But it was something other than the Empire resurgency that the books were stuck on for the longest time too.

But it was a very mixed bag as they tried merging the Prequel era concepts and plot into the new books. I mean R2 didn't show off anything about Padme until 20-30 years after he met Luke or so? The Mortis Trio had a parasitical entity that would make force users go mad (Something I wonder if the High Republic is trying to emulate lately). A lot disliked Traviss's take on Mandalore, but I loved it and was completely irked when Clone Wars walked a lot of that development back.... only for later series to kind of go back on it again somewhat. Heck Beskar was first named by her in 2006.

I read most every novel they put out until the Disney buyout. After that, it's tough for me to invest my time in reading things that will just be swept away and mostly ignored

Citizen
Got all of my Unleashed off the shelf today. Really wish I had gotten Slave Leia when she was out. Was there ever a Luke in Stormtrooper disguise? I need to find a list of figures made. 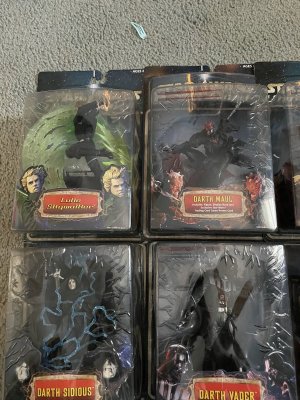 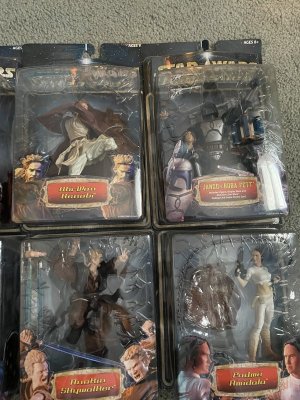 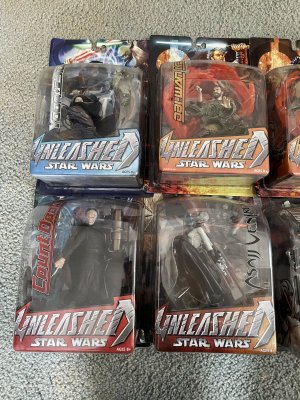 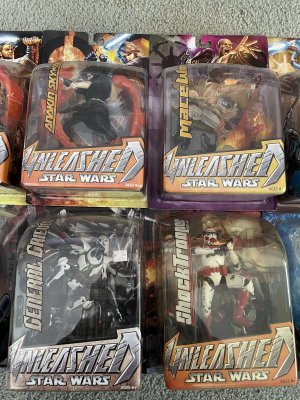 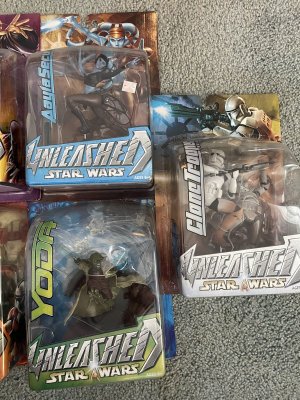 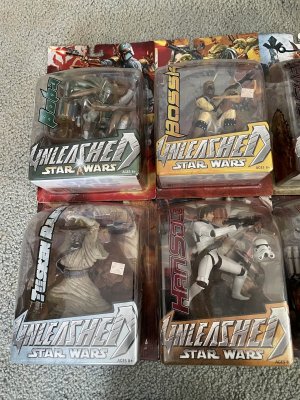 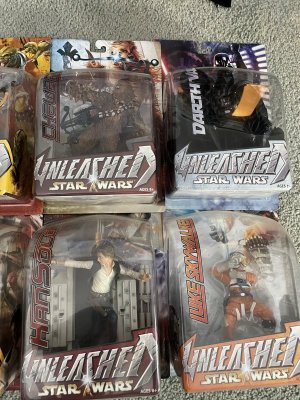 Citizen
I still have the Count Dooku figure from that set
So awesome!

Citizen
Fan First Wednesday continues to let us realize that the Star Wars team is a tad out of touch.
7 reveals
4 were Black Series Archive releases of
C-3PO
Lando in Skiff Guard Disguise
Dengar
And Emperor Palpentine with just his cane, no lightning hands or throne.

BS Gaming Greats gets a Nightbrother Archer from Jedi:Fallen Order

Vintage Collection gets a rerelease of 501st Clone Trooper with new Clone head print under the Helmet.

and finally with the biggest time spent a Vintage Collection playset of the Throne Room alcove from Jabbas Palace from Book of Boba Fett. Includes fat Bib Fortuna. Throne Platform can roll out from the rest of the display. Rotating spit and tons of little detail pieces. $229.99 US

everything other than The Nightbrother goes live for preorder on Pulse and elsewhere tomorrow at 1 eastern.

Citizen
On the one hand, the throne room playset should work with the earlier playset and presumably you can clear all the other stuff off and put a Jabba on the platform. On the other hand - that's a lot of scratch.
You must log in or register to reply here.
Share:
Facebook Twitter Reddit Pinterest Tumblr WhatsApp Email Share Link
Top Bottom