Citizen
Han tries to keep his lover from entering into a political marriage by doing something brashley and not thought out completely seems about right to me.

Staff member
Council of Elders
Citizen
Han in the movies has his Leroy Jenkins moments but he really tries to use his head the majority of the time. 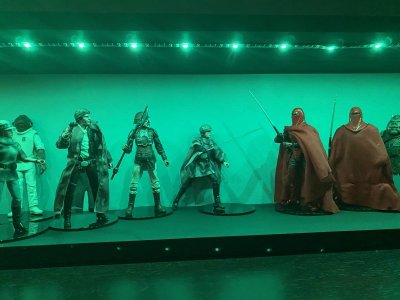 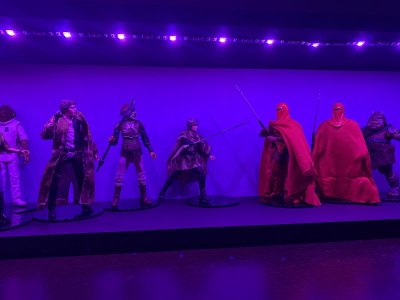 Citizen
What's your most wanted for Black Series? I could do with more Jabba's Palace aliens. I understand we're getting Bib Fortuna. I'd love to see Tessek (the squid head), a couple of the Weequays, and Ree-Yees. With The Book of Boba Fett coming out, I can see these guys getting immortalized at six-inch scale.

I'd be delighted to see Lobot and Nien Nunb.

Citizen
Eh, eventually the MAGA Chuds will realize they bought a dozen figures for no reason and her aftermarket prices will drop back to normal. It's not like she was a limited release of any sort.
G

Citizen
It will never happen, but my dream is for a Black Series of this Luke, probably my favorite individual SW figure growing up. 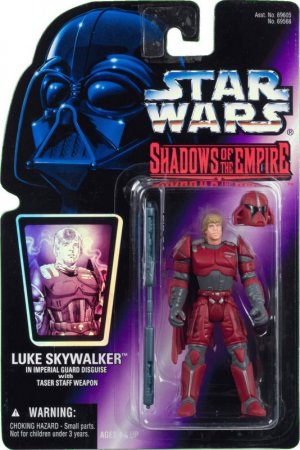 Citizen
I'd love the main cast of Kotor in Black

And say Cindel and the Witch Lady from the Ewok Adventure.

-ZacWilliam, I'm sure I'm forgetting something that'd be cool. I'd buy Dash Rendar for just the nostalgia or irony or something... the nostalgirony?

Citizen
Pretty much I'm down for anything outside the movies. I bought OT and PT stuff for years in 3.75 and have no desire to rebuy them all over again in a larger scale save for a select few cool designs like Vader, Maul, or Fett. And no one in the Sequel Trilogy had that cool of a look that wasn't borrowed from something else. Kylo is a poor mans Revan. The majority of my Black Series collection consists of Rebels, Clone Wars, or other EU things. So like Zac the cast of Kotor is high on my list. Revan and Zalbaar are a start. But I really want Malak, Bastila, and Mission. And HK-47! I already have the 3.75 build a droid but a 6inch is a must!

That Coruscant Guard Luke would be awesome in 6 inch too.

My big wants won't happen so much anymore as I really would have liked some of the next generation Legends characters. Tenel Ka, Crimson Empire II Nom Anor. Mara Jade. Jacen and Anakin Solo. Any of the Yuuzhan Vong despite the writing , I always kinda liked the look the artwork gave them and all. I loved the 3.75 comic 2 packs as long as they had cool and interesting looking characters and not just weird comic colored repaints of figures we already had.

But uh, they can keep the cast of Resistance. It was a decent show, but very lackluster and none of the characters have lingered long in my mind since the show ended.
Last edited: Sep 16, 2021

Staff member
Council of Elders
Citizen
I was really into star wars at one point, but I find that the fandom for star wars is entirely too negative about everything so I just quit collecting the figures.
F

Citizen
In case you didn't hear Kotor is getting a remake for Ps5 and pc (and I hope xbox), so I think we'll be seeing more of them in Black series.

After years of seeing every movie character getting toys it's always exciting for me to see Legends or EU get something. So Shadows of the Empire was mind blowing to me when they came out.

Come to think of it Shadows were the first EU toys weren't they?

Citizen
I completely forgot about the High Republic novels I've been reading and the Anime show I am super excited about coming out next week.

Characters from both of those also go high on my list.

-ZacWilliam, and what was his name Thurm Scissorfist? That guy.
U

Generator said:
It will never happen, but my dream is for a Black Series of this Luke, probably my favorite individual SW figure growing up.View attachment 548
Click to expand...

That figure was sick, one of my favs growing up as well, though I probably used it with the mask on as a new "bounty hunter" more than I did as Luke, he did see some action as my Jedi armor Luke. Still probably the coolest Trooper/guard variant to come out of Star Wars. Would have been a much cooler look for Phasma than just a Chrome look. 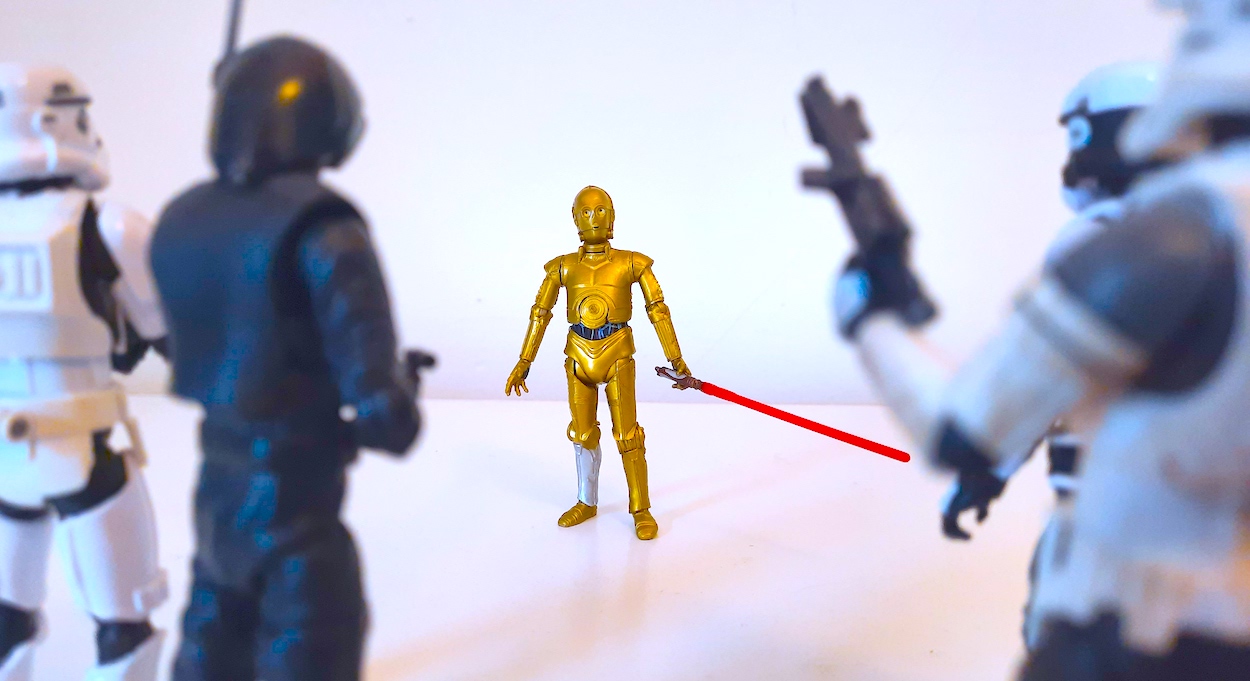 Citizen
I know we're getting the Boba Fett show, and I imagine the show will explain it, but--why didn't Fett just take his armor back right away? He busts out of the Sarlacc pit, and spends a handful of years just being a desert-dwelling drifter, while Jawas end up with his armor?

Fett still had his ship. I'd be surprised if he stayed on Tatooine all that time. But maybe he did?

Why even allow Cobb Vanth to have it as long as he did? Did it benefit Fett to pretend to be dead for a time, and better marshal his forces to take on Bib Fortuna?

Did Fett think himself unworthy of the armor for a time, and he felt the need to accomplish some tasks before he felt worth of his armor again?

Was Fett all like, "Hey, he looks like the guy from 'Justified'" and Fett let him hold onto the armor for a bit?

Citizen
Well, we don't know anything official, but I'd say it's implied that Boba was tracking Mando (maybe word had gotten out of Mando's presence on Tatooine from the first visit), and only learned his armor still existed when he saw Mando get it back from Vanth.
S

Citizen
I figured that Boba Fett escaped the pit, but was injured with him armor damaged (the jetpack definitely didn't work). I presume he had to dredge his way through the desert, probably passed out and was picked over by Jawas. Someone else found him and nursed him back to health and he went about his business for years until rumors of Mando started to circulate.


Star Wars Visions dropped today! Like most anthologies, quality is hit or miss. By and large, I think its a pretty good set. My biggest complaint is that a LOT of the episodes trended to retread the same themes and ideas (traditional vs modern, industrial vs nature, etc). Further, for how open the franchise is...the general content skewed very heavily towards the same stuff, ie, LOTS of Jedi stuff as central components. So, each short:

The Duel- Maybe not the best to start off with...because I think it is generally the best of entire lot. Paying respects to the Kurosawa films that inspired it, while keeping true to franchise conventions, this one married all that with an amazing visual style. Nods to a great twist on the assumed conventions of the franchise. Seriously, this is gorgeous short it just feels a step above where the other ones ended up landing.

Tatooine Rhapsody- A musical romp that is so enjoyable BECAUSE it presents a new angle of the universe without standing apart from it. Nice music, sharp animation, nice short.

The Twins- Trigger's first offering is...maybe the worst of the lot. Plot is nonsensical, no clear focus of narrative. No meaningful character arcs, and while fluid, animation is lacking in detail and the action sequences fall a bit flat. The worst part though...is that it doesn't "feel" like a part of the Star Wars universe. Sure there are trappings like Star Destroyers, "Stormtroopers" and lightsabers...but it is "outlandish" in a garish way. Fights in the vacuum of space with no gear, random changes to the nature of weapons... It stands out amongst all the other shorts because it disregards the nature of the world of Star Wars in favor of pointless flash. Even in light of the embellishment the medium provides...this short stands out in the WRONG ways.

The Village Bride- Retreading The Duel in some ways. this is just a nice little character piece of Jedi on the run after Order 66. Nicely animated, great music. Nothing outstanding, but a solid entry.

The Ninth Jedi- Part of a Jedi origin story, this does some nice juggling with design conventions. Great action sequences, a good story, IG delivered a solid entry.

T0-B1- Astro Boy in the Star Wars universe. Like Tatooine Rhapsody, it presents a fascinating story and unique visuals while still staying true to the Star Wars mythos. By avoiding any major visual "landmarks", there's a timelessness to the story that gives it a lot of charm.

The Elder- Trigger's "prestige" offering. It's a solid entry, but the story is just "there" and without context of "The Elder", it basically just ends up being...there. The move to a more grounded aesthetic is also a bit odd as I feel that removes a LOT of Trigger's "identity" from the animation.

Lop & Ocho- A fascinating little story that retreads some of the environmentalism previously seen with Village Bride. Probably strongest overall story being offered and the animation was there to back it up.

Akakiri- You remember all the "forbidden love" angles from the prequels and Clone Wars series? This another take on that. Not bad...but like with Elder, there isn't much context to the characters or story so it just ends up being...there.

Again, the overall package is generally solid. But it also feels safer than it probably could have been.

Citizen
I feel that the Twins doing what they did made it one of the more enjoyable spectacles of the anthology myself. But I knew just from the previews not to expect it to adhere to reality of the cannon in any major way. Star Wars Promare was fun as hell for me, but I know that it's going to be divisive.

T0-B1 was my least favorite of the bunch because of it's just being a mash up of Astro Boy and Star Wars. It became to predictable in how the story was going to flow. Animation was cute as heck but It was the story I had the least interest in.

But my favorite was The Ninth Jedi. while it was somewhat predictable in how things were going to end up it surprised me when
All but one of the Jedi on the station ended up to be Sith Acolytes. Also a nice touch when the last one turns back to the light that his saber turned Purple since it's been a color most often used by Jedi who border the Dark side or have come back from it.
Can Production IG get a series order?

The Elder felt like the short most likely to be able to fit into Cannon, namely the High Republic era. The lead characters look quite a bit like some of the characters in the novels and comics. But it was odd that it was from Trigger as it didn't have any of their over the top flair to it and was just a rather well animated story.