A Long Time Ago In a Galaxy Far, Far Away.... - Star Wars General Discussion

Citizen
I mean, the new timeline thing is something the fandom's been talking about for years (and thanks to Rebels there's even an in-universe mechanism to introduce it), but that's a long way from Disney caring.

Cybersnark said:
I mean, the new timeline thing is something the fandom's been talking about for years (and thanks to Rebels there's even an in-universe mechanism to introduce it), but that's a long way from Disney caring.
Click to expand...

As an aside, I had a theory (which is mine, and what it is too) that the climax of Luke Skywalker and the Shadows of Mindor (in which Lord Cronal/Lord Shadowspawn/"Agent Blackhole" is discorporated into hyperspace) would provide an in-universe explanation for the Legends EU being replaced by the current post-Endor novels timeline -- his spirit saw time, and reworked things into a more entropic pattern, as befits a former Sorceror of Rhand....

But currently, though there's much talk about What Lies Between The Worlds, all we can say with certainty is that some of the current Story Group also helped with the old Holocron Continuity Database... so you never know.
Last edited: Dec 5, 2022

Citizen
If Lucasfilm really wants to move beyond the sequel trilogy, I think they should jump ahead by a few hundred years or so, clean slate, for the Jedi, just merely have them as fairy tales within the universe, I mean, I seriously doult your avarage Joe on the streets would know that the Emperor was Darth Sidious and a Sith lord and only know of his public image, similar with Darth Vader, who would likely been viewed as the Emperor's top enforcer, so the Jedi & Sith are merely fairy tales told to children and only the political elite truly know the present day Jedi order!

Alteratively, for the brand, go backwards, WAY before the High Republic stuff and tell the stories of how the Jedi rose up along side the republic and the past involving the Sith, but instead of telling the story from the point of view of a Jedi apperntice, do so with a Sith appentice, see the other side of the coin, so to speak!

Superomegaprime said:
Alteratively, for the brand, go backwards, WAY before the High Republic stuff and tell the stories of how the Jedi rose up along side the republic and the past involving the Sith, but instead of telling the story from the point of view of a Jedi apperntice, do so with a Sith appentice, see the other side of the coin, so to speak!
Click to expand...

I really thought that an opportunity was missed by not having a multimedia showcase of the Pius Dei era of the Republic. The Sith species are still in their corner of space, unknown to the wider Galaxy for the most part, the Jedi shutter themselves on certain planets as the Republic gets taken over by religious fundamentalists of a a different sort altogether. With the cathedral battleships and the Bureau of Ships and Services having a more active role in politics, the saga could have had a more Dune-style look and feel, and given us a "everything's the same, except for the fact that it's all different" reboot treatment without actually messing with any established lore (as the Prequel Trilogy is still some 12 000 years away in-universe, and most of the early Jedi v. Sith stuff a closer 5000-7000).
Last edited: Dec 8, 2022

Citizen
That first trailer for the game where the Sith dude walks up to the Jedi temple then the shuttle crashes in full of Sith. That’s what I want to see in a movie.

Citizen
Patty Jenkins has stated that Rogue Squadron is not scrapped, just not top priority at the moment. 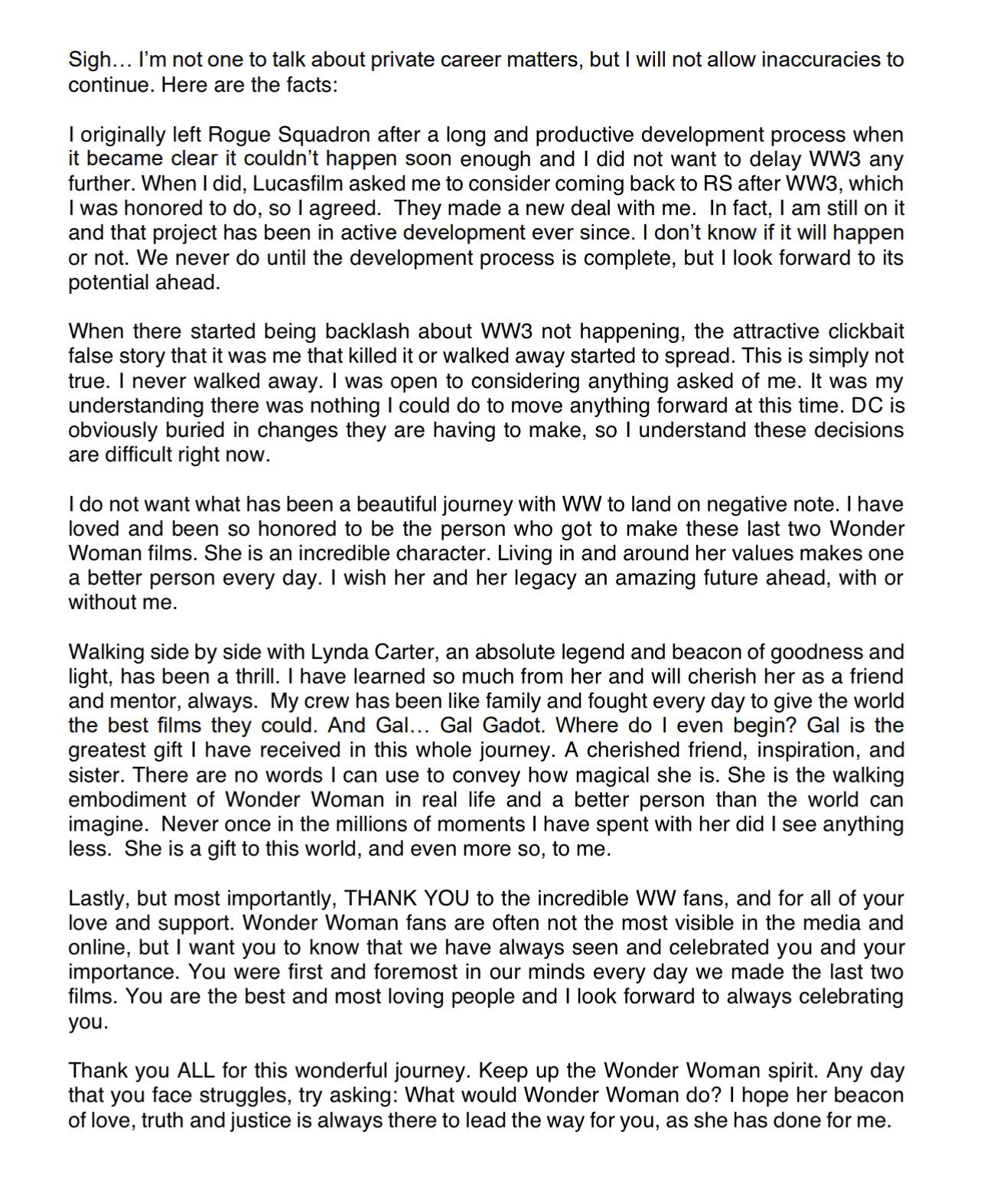 Citizen
So she says Star Wars is not her top prioty, thou what being said on the net regarding Wonder Woman 3 is that she raged quit as she refused to take notes from her bosses at Warner Discovery and sent them a link to a wikiepida page about "Character arcs!" I have to ask, what has she got lined up going forwards that would put Star Wars on the backburner? Some big budget Mega film, and after looking her up on wiki, nope, just some film she helping to produce with Chris Pine directing, trying to create a script for Star Wars, should be a prioty if she really wants to cement herself as a big time writer, director/producer!

From where I'm sat, Lucasfilm is clearly a studio in chaos with no clear vision or direction for its biggest brand and unable to get a single movie for that brand, off the ground, what I know, they had more people attached to make movies than films actually produced and that is pointing to poor management and the same management has let its people run mock on social media with no regards for the consquences of their actions
You must log in or register to reply here.
Share:
Facebook Twitter Reddit Pinterest Tumblr WhatsApp Email Share Link
Top Bottom