As we all celebrate 2020 coming to an end, lets take a moment to look back upon the year and all the big events that occurred for our fandom!

While 2020 has been universally hated and despised the world over for a large assortment of reasons, mostly due to the pandemic, the Transformers fandom and brand had a good year. Lets take a look back at this year’s biggest moments and news stories for our fandom.

The first major event in our fandom occurred in the beginning of February with the return of BotCon! Not without its controversy, the convention came back thanks in part to a group of investors who bought back the name and plan for the convention’s return in 2021! We here at the Allspark host the official Discord server for the convention, so stop by and take a look for the most recent update on this classic fan convention.

Cyberverse season 3 launched this year, giving us a great ending to a surprisingly good Transformers series. Given the subtitle Transformers Bumblebee Cyberverse Adventures, the show introduced us to some great original characters as well as giving us new takes on existing ones. If you haven’t this show, then you are truly missing out. Go watch it now for free on YouTube.

Speaking of YouTube, Hasbro used it to have Soundtrack Saturdays! Each week Hasbro would post a selection of music that was previously only available on their sold out G1 Music Vinyl record. The sound quality is worlds better than anything that we have had with these tracks previously. G1 fans should give it a listen if you missed it! I should also note that Hasbro also released a TFTM ambient nature track as well this year. 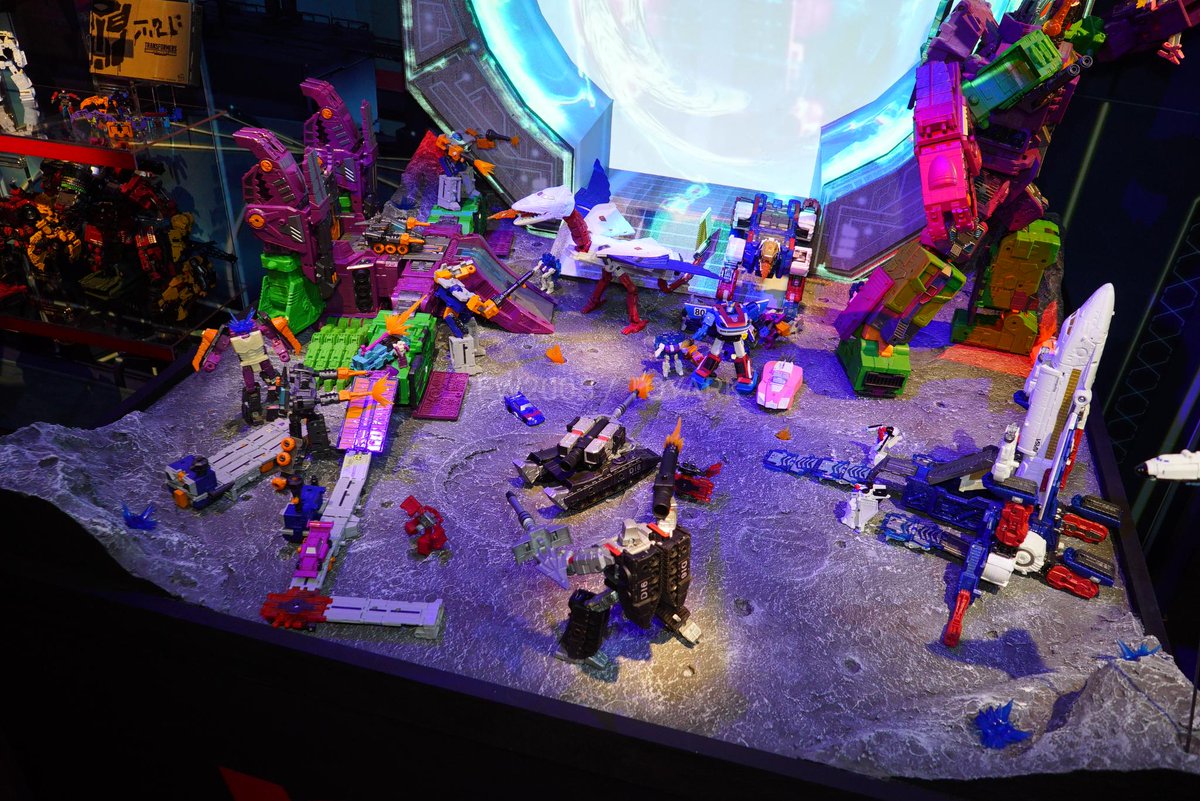 The War for Cybertron trilogy continued to cement the nature of its approach in 2020, as the second chapter’s toyline continued to refresh the classic G1 animation models and give them nicely-articulated new bodies. Two releases in the line, however, went above and beyond this simple design ethos, and delivered memorable big-ticket toys to anchor the toyline.

Earthrise saw the Commander class turn into Commander Modesty class, as the price point introduced with Siege Jetfire became the venue for an update to a 1986 icon. Earthrise Sky Lynx finally delivered the classic space transport in all his glory, from the dual robot modes to the sizeable combined robot/vehicle modes, to the brand-new base mode. The name had seen reuse before, whether on a Mini-Con cargo plane/blaster, or a Predacon dragon, or a Combiner Wars torso styled after the G1 combined robot mode. But here was a suitably faithful update that did everything the original did and more. (He even made for a decent surrogate Rocket Base for your Siege Countdown!) Sky Lynx himself might be content to see his visage done justice — and shrug that it’s no wonder everyone wants to name themselves after him.

Another long-overdue remake took the top price point, as the latest Titan class Transformer put a sting in the tale of the second WFC chapter. While still lacking a few accessories to really bring that G1 feel home, Earthrise Scorponok continues the run of new-mold Titans being good and fun. We have to go all the way back to the mid 2000’s Energon toyline to get our last Scorponok homage, and this one blows that ultra class figure away! Earthrise Scorponok’s scorpion and city modes, navigated and driven by Lord Zarak and his new intermediate Headmaster/Transtector body, bring back the charm of the original — all alongside a robot mode that now stands… well, closer in height to his nemesis, Fortress Maximus. (As another cool plus, his little buddy Fasttrack is available in Earthrise as well, in the fun Weaponizer format.)

The Transformers franchise returned to its roots in many ways with the War for Cybertron trilogy’s toylines, and one of the memorable ways was in pairing the toyline with a cartoon to market it. Pushed as an original “anime” on streaming service Netflix, the new “War for Cybertron” trilogy brought a new CGI-based show to fans courtesy of Hasbro, Rooster Teeth, and Polygon Pictures. This ended up being a good move in this pandemic year, when so many of us were sustained by streaming media and thus the perfect captive audience for new Transformers lore.

Siege debuted on July 30, and set the tone for the new trilogy of shows: a grim, war-torn aesthetic and feel, depicting war-weary leaders making a final stand. This furthered the gritty vibe the toyline had been going for, supported by a Walmart-exclusive line of redecos promoting the show. Siege, the first part of the trilogy, gave the spotlight to familiar faces like Optimus Prime, Megatron, Bumblebee, and Starscream, but also had key roles for Ultra Magnus, Elita-1, and Impactor, among others.

Right before the year ended, the next chapter in the trilogy would land: on December 30, Earthrise upped the ante by following the new status quo, and introducing new players like the Quintessons and a new faction of Mercenaries. The returning characters continued to drive the action, with Elita-1 in particular taking more of an active role. This was also supported by a Walmart-exclusive toyline, which got hit by distribution snags that also plagued other parts of the Transformers franchise this year. Both six-episode blocks are still up on Netflix, so if you need to catch up, now’s a good time.

This entry from the Takara-initiated side of Generations Selects is arguably enough of a landmark, and enough of a success, to merit his own entry.

Historically, not much love gets shown to the tail end of G1, at least not as much as the first few years gets. That changed in a big way with Takara’s Generations selects releases, starting with a Star Convoy retool of Power of the Primes’ Leader class Optimus Prime figure. But Takara would raise the bar by tackling a heavy retool of Titans Return’s Voyager class Galvatron figure: this sculpt and its sci-fi altmodes would prove to be a viable canvas for the first-ever toy of Super Megatron!

Generations Selects Super Megatron is a lavishly extensive retool that fittingly (re-)reforms Galvatron back into Megatron, complete with Battlestars-faithful Super Jet and Ultra Tank modes, as well as different looks for his Super Megatron and Ultra Megatron robot modes. Per TFWiki, he stands in scale with the aforementioned Star Convoy — but has more than enough firepower to eclipse that Autobot leader.

Almost thirty full years is a long time to wait, but if you’re anything like the fans who eagerly snapped up a copy, you’re still not done thanking your lucky (Battle)stars that this version of the character finally got its due.

2020 was a rough year for all of us, and Hasbro was no exception. The toy giant tried its best to respond to the pandemic, temporarily closing their offices worldwide from mid-March to April 1st in an attempt to help prevent the spread of the disease in some way. Nevertheless, further challenges would present themselves — from distribution woes to ever-present leaks spoiling future release surprises.

Whether in response to these issues or in an attempt to find a different way to reach fans, they pivoted to a more proactive online approach. Looking back, it’s pretty neat to see that while it all peaked at the first-ever Hasbro Pulse Con online event, but started with simpler, regular online livestreams called Fan First Fridays. Later on, Transformers would get its own separate day for reveals (Transformers Tuesdays), which also got fan communities like the Allspark buzzing about the week’s new reveals for upcoming Generations Selects, or Pulse exclusive, or Collaborative stuff.

These quick chats with the different brand teams had fans excited on a weekly basis, which we all needed during this rough year. Even during the best of times, it’s hard to say no to a weekly mini-SDCC or Botcon panel — and in a year when pleasant news could get pretty scarce, these were a fun little diversion that let us remember the simpler joy of eagerly anticipating new toys.

2019 gave Transformers fans and Ghostbusters fans alike a wonderful gift in Ectotron, the inaugural release under the new Collaborative series line. This finally gave fans of both brands a sizeable converting Ecto-1, loaded with clever touches like a roof rack that doubled as a proton pack and a little Slimer buddy. In a celebration of the landmark 35th anniversary for both collaborating brands, Ectotron was released alongside a Ghostbusters-themed redeco of Masterpiece (MP-10) Optimus Prime, and was even promoted with a five-part comic crossover miniseries from IDW.

After this release, of course, the question became “what could they possibly do next”, and 2020 brought a lot of interesting answers. Fist, soaring right out of the Danger Zone would come Maverick, a converting F-14 Tomcat from “Top Gun”! It’s not the first time we’ve had a transforming jet, of course, but it might be the first time we’ve gotten one that had its own volleyball.

But Hasbro wasn’t done: Maverick was followed by Gigawatt, a converting time machine (you know, a DeLorean)! Lovingly detailed and coming with pretty much everything you could ask for, from the Mr. Fusion generator to the Clock Tower lightning rod to a flux capacitor on his chest, Gigawatt was a sought-after exclusive that was hard to obtain (something exacerbated by the nature of distribution and online shopping in 2020).

The future (heh) of Collaborative continues to be full of potential, especially if Hasbro’s last Collaborative reveal of 2020 is any indication. Seeing release in 2021 is a mashup of Transformers and the 90s X-Men animated series, represented by a converting SR-77 Blackbird named “Ultimate X-Spanse”! No, seriously.

After a solid few years spotlighting the decade-strong live-action Transformers films, Studio Series had a new (if momentary) direction officially revealed on the October 16th “Fan First Friday” broadcast. In 2021, Studio Series would be dabbling in a throwback to the first-ever theatrical release for Transformers: 1986’s animated “The Transformers: The Movie”! A hot first lineup of characters would all taking the number 86 (with sub-numbers to distinguish each), and feature all-new sculpts of Movie-featured characters.

The first wave would feature Deluxe class figures of Autobot Jazz, Kup, and Blurr, Voyager class figures of Hot Rod and Scourge, and Leader class figures of Grimlock (who comes with a tiny Wheelie!). These new sculpts strive for better animation-model accuracy, providing a neat diversion for Studio Series that dovetails nicely with the G1 resurgence going on in the “War for Cybertron” line. In a last-minute surprise before the end of the year, some of these even showed up early at regular retail in different parts of the world — including the U.S.!

Studio Series 86 releases aren’t set to take the baton from live-action film-based designs, but it looks like they’ll make sure that line has something for everyone — more than ever before.